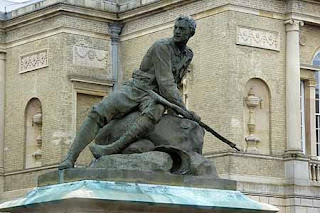 I first saw the Boer War memorial in the market place at Bury St Edmunds in 1965 shortly after my family moved to Suffolk from London. I was nine years old but I remember being struck by the size of the thing and impressed by the figure of the soldier on the top. This was no stiff statue in heroic pose but the form of a soldier who had lost his hat and was half sitting on a rock and who quite frankly looked a bit scared.

On the sides of the memorial were the names of some 193 soldiers (mostly from the Suffolk regiment) who had lost their lives in the South African War 1899-1902. I knew nothing of this conflict as my military history was limited to a little bit about the First and Second World Wars (mostly gleaned from Commando comics and war films) and a small amount about the American Civil War (all of which was gleaned from the information on the back of my set of ABC bubble gum cards).

However, being a child and being interested in playing with toy soldiers, the idea went into my head that someday I should include the Boer War in my list of possible periods to play as a wargame. I did try half-heartedly a couple of years later to convert an Airfix WWI soldier into a suitable figure by adding a plasticine helmet but this was not very successful. At the time there was a distinct lack of suitable commercial figures for the period and I was soon lured away into other wargaming interests and pretty much forgot about the whole idea.

Until now that is.
Posted by Stryker at 12:23 No comments: