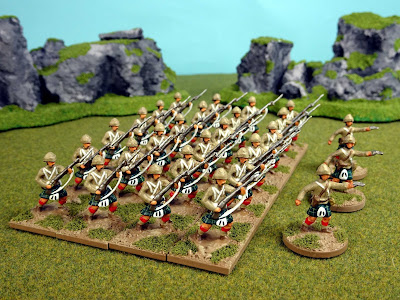 I’m quite shocked to see that it’s been a year and a half since I painted the first 6 figures of the Gordons but here at last is the completed unit. All the figures used are by Jacklex.

The main reason for the delay is that I painted a lot of Napoleonic figures last year but now that I have a permanent wargames table it has given me the incentive to finish the Boer War armies.

I’m very close to having the forces I need to refight the battle of Elandslaagte which was the initial aim for this project. The Boers are all finished but the British still need some more artillery and a unit of dismounted Imperial Light Horse. I hope to get these done soon but we’ll see!
Posted by Stryker at 06:47 10 comments: