I painted my wagon 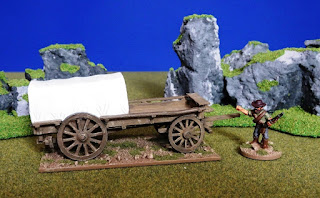 Lee Marvin and Clint Eastwood would be proud.

This is the completed Jacklex Voortrekker wagon BS1. Considering that this project is already a distraction this item has to be labelled a distraction within a distraction. That said, I really enjoyed the challenge of constructing, painting and basing this model.

Next I will be turning my attention to finishing off my first Boer commando which is already half painted so hopefully won’t take me too long.
Posted by Stryker at 03:38 2 comments: 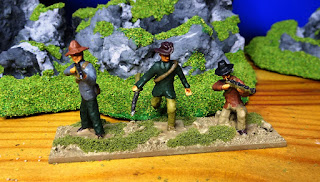 Here I go rebasing again! This is a group of 3 Jacklex Boers lurking near a Kopje no doubt waiting to give fire on some poor Tommy Atkins.

On discussion (with Roy) I’ve decided on a more traditional approach to basing my Boer War armies. A standard infantry base will be 60mm x 20mm and will hold 3 Boers or 4 British. Each unit will have one base split to allow for casualty removal and officers and commandants will be individually mounted on 20mm circular bases.

A Boer Commando will be 12 figures plus 1 commandant and British units will be 24 figures with 3 officers. I’m going a bit heavy on officers because my rules will have a strong rallying element for the British with officers trying to prevent their unit from getting pinned by Boer fire. I’ve got a half fleshed out set of rules now but more on that in another post.
Posted by Stryker at 06:50 No comments:

Email ThisBlogThis!Share to TwitterShare to FacebookShare to Pinterest
Labels: Boers on foot, Jacklex 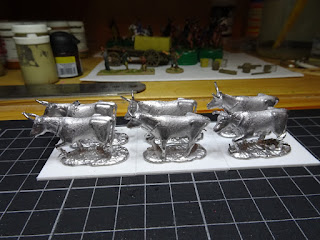 I received my first proper order from Jacklex a few days ago and I couldn’t resist adding in these 6 oxen to pull my Voortrekker wagon. They really are superb little models and I think the wagon will look great with these added to pull it over the veldt.

Also in the order were enough British figures in the running pose to make a full 24 figure unit and some more Boers to flesh out a commando or two. I’ve also taken delivery of a unit of firing British infantry from Raventhorpe so I have plenty of figures to get on with. Now I just need to find some painting time!
Posted by Stryker at 07:21 4 comments: