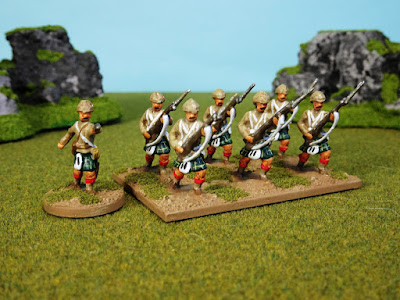 This is the first company of my Battalion of Gordon Highlanders (although they’ll be able to stand in for any of the Highland Regiments as my tartan is rather vague to say the least) I’ll need to paint another three companies to complete the unit.

I settled on using Jacklex for this unit as there are no other suitable 20mm Highlander figures available for the Boer War. I’m actually growing more and more fond of the Jacklex range and I enjoyed painting these figures, they have a certain dash about them.

I’m not sure when I’ll get time to finish this unit as I’m concentrating on my Napoleonic’s at the moment and painting time is always thin on the ground during the summer. Hopefully it will be within the next month or two.
Posted by Stryker at 11:45 16 comments:

I’ve just finished another Commando bringing the total in my Boer army up to three plus a mounted one. This means I have enough Boers now to have a stab at playing a game based on the Battle of Elandslaagte. This is something I’ve wanted to do since I was 14 when I was given a copy of “History of the British Army” (edited by Peter Young and J P Lawford) which contains a chapter on the battle that sparked my interest in the Boer War.

I’m still short of British though as I need a Highland regiment (which I’ve just started to paint), two British field guns, some lancers and a unit of dismounted Imperial Light Horse. This is likely to take me some time to paint up but it’s good to have a goal.

I’ll also need some scenic items including Elandslaagte Station, some farm buildings and a few barbed wire fences. Oh, and I need to finish writing the rules!
Posted by Stryker at 10:59 8 comments: