I finally received my packet of Jacklex samples this week and set about painting a few up. The first thing I noticed was that, as Matt had warned me, they had quite a lot of flash metal and it took about 45 minutes just to de-flash them and file the bases. However that said they are surprisingly charming little figures although sadly they suffer from the same problem as the Newline range – they’re not to a constant scale. The marching highlander for instance is a good few millimetres taller than his advancing friend.


This is a shame as I could have been tempted and I particularly like the running figures with separate rifles. It’s a bit fiddly gluing the rifles to the hands of the figures but it’s well worth the effort, the regular British infantryman is the best of these. So far I have only painted one Boer but I will post the rest here in due course.


I’m glad I got these samples but in the end in it just reinforced my original decision to use the Newline Designs colonial range for this project. This decision was also helped along by the recent release of Highlanders by Newline (see my last post). The one remaining problem is artillery as I can’t find anybody who makes 20mm Boer artillery and of course I must have a pom-pom! Jacklex do a decent range of British artillery including a very grand looking 4.7” naval gun and a deadly maxim gun. I may possibly be able to convert or scratch-build some Boer guns, I’ll have to see.
Posted by Stryker at 11:35 12 comments:

I was idly checking the Newline Designs website yesterday only to discover that they have just released some Highlanders. The figures look nice and I wonder if being a new release they may be a bit larger than the other British infantry figures and fit in better with the Boers? There are also some figures listed as York & Lancasters which may be passable for Boer War British although they have blanket rolls.

So as you can imagine this has brought the Newline range back into the running. I’m still waiting for my Jacklex samples to arrive and then I will finally have to decide which figures I'm going to use.
Posted by Stryker at 09:34 No comments: 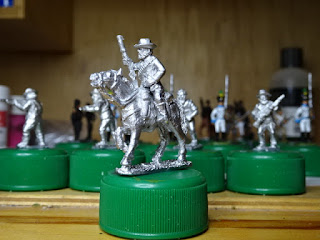 Having said in my last post that I was definitely going to go with Newline Designs as the figures of choice for this project I’ve had a bit of a wobble. One of the problems I have with Newline is that although the Boer figures are absolutely superb the British ones are a bit disappointing being noticeably smaller than the Boers and less animated. Also, rather crucially, they don’t do any Highlanders and I really wanted to include these in the OOB of my British force.

So I decided to put in an order for sample figures from the Jacklex range just to see if I could maybe convince myself to go old school once again. The Jacklex range is comprehensive and does indeed contain Highlanders but the figures are quite simplistic and I need to see some in the flesh to help me make up my mind (I do have some Zulus and I’m not too keen). In many ways an old school approach may be better for the sort of games I had in mind and may also make the task of painting easier.

While I wait for the samples to arrive I thought I’d paint up a few more of the Newline Design figures. The picture shows one of the mounted Boers in their range getting ready for the brush – you can see why I have been drawn towards them, truly brilliant little works of art.
Posted by Stryker at 11:36 4 comments:

Having decided that I wanted to do this project in 20mm I was pretty much limited to a choice of three manufacturers. Firstly the range in plastic by Srelets (the figures look ok but plastic isn’t really my thing), secondly the comprehensive range by Jacklex (perhaps the most logical choice but I wasn’t sure if I wanted another ‘old school’ project), and thirdly the colonial range by Newline Designs (limited range but the Boers in particular are very nice). In the end it was the picture of the Boers on their website that swung it for me and I plumped for Newline.


I put in a mixed order for the Boers and various packs of the British infantry from the Sudan War range as I felt these would be near enough to pass as Boer War British. It was slightly annoying that the website doesn’t show any pictures of the British infantry which is a bit inexcusable in this day and age. However, order done I settled down to wait for the troops to arrive which they did a few days later.


As this is a side project to my main Napoleonic one I decided that I didn’t want to spend hours painting these figures or I’d never get anywhere. Fortunately the uniforms are all quite drab and the figures lend themselves well to block painting followed by a wash of GW Ogryn Flesh. I still found myself trying to include too much detail and had to go back several times to simplify the paint job but I’m quite happy with the result.

Next I need to decide on the organisation and OOB of my armies and then put in a proper order to swell the ranks.
Posted by Stryker at 11:40 9 comments: