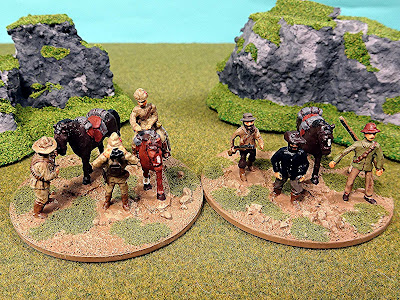 I’ve just completed a couple of army command groups, one for the British and one for the Boers. These are mounted on 6cm MDF discs and I think they look quite smart.

I had a lot of fun selecting the figures and putting these mini ‘dioramas’ together. The British group is composed of a Jacklex mounted officer and figure with field-glasses, the horses and horse holder are by Newline Designs. The Boer commander is by Newline (from the pom-pom crew) and is flanked by two of the remaining Scruby figures Ross sent me. These command bases have no function in my rules, but you can’t have armies without commanders.
Posted by Stryker at 10:58 12 comments:

Well, I see it’s been five months since I lasted posted here but then I did say this was a side project to my main interest and in my defence, I’ve been painting a lot of Napoleonic’s so have not been idle. Fortunately, due to Matt helping me out by painting the figures I’ve been able to complete the 5th Lancers taking me a bit closer to my goal of re-fighting Elandslaagte. 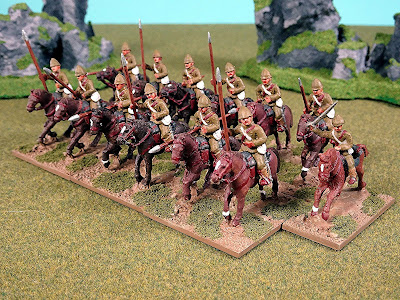 I rather stupidly decided to fit the lances to the figures after Matt had painted them. This turned out to be a big mistake as I had to drill holes and generally fiddle about to get these to look right causing some damage to the paintwork in the process. However, having touched them up and based them they now look quite smart, rather by luck than good judgement on my part. 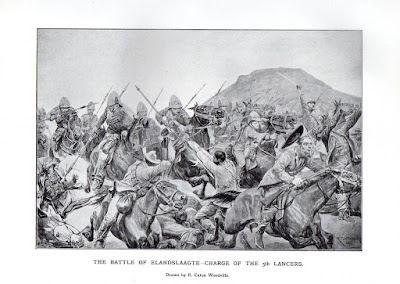 The 5th Lancers famously charged the retreating Boers at the end of the battle catching many in the saddle as they tried desperately to get away on their slower ponies. The Boers were none too happy about the use of the lance which they considered to be unsporting.

The troopers are by Newline Designs and the officer is by Jacklex.
Posted by Stryker at 11:52 8 comments: