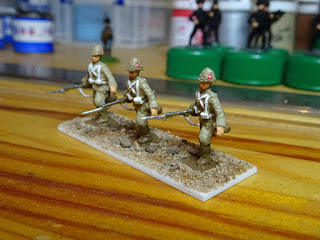 I found some time to work on my first base of British Infantry. The figure is Jacklex B7 British infantry running with separate rifle. The painting style is deliberately basic to facility speed of production but I still might give these lads a brown wash for a bit more realism.

Following my first ever game of Commands & Colours (click here) I’ve been thinking a lot about how I might develop my own Boer War rules using similar mechanisms. I could even be tempted to use hexes (there, I’ve said it) as I think this might give me just the sort of solo game I’m looking for.

My current idea is to have units of 6 figures (2 bases) for British infantry and a single base of 3 figures for the Boers. These units could represent anything from a company to a full battalion depending on the scale of the battle being fought. This has the advantage that I could refight some of the large scale battles of the war using less than 100 figures - surely even I could achieve that?.
Posted by Stryker at 05:19 2 comments: