The Maxim gun was invented by Hiram Maxim in 1883 and was the first proper machine gun to be deployed by the British army. It was used successfully in several colonial wars although it is said its effect was more psychological than physical. By the time of the Second Boer War there were two maxim guns attached to each British battalion. 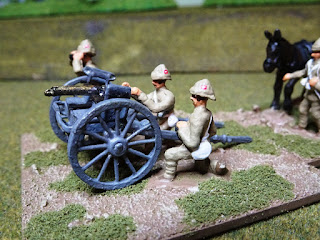 “Whatever happens, we have got
The Maxim gun, and they have not” 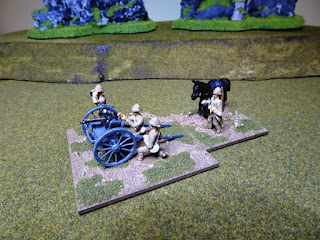 The Boers however were not the spear wielding tribesmen the British were used to dealing with as they had invested in some state of the art weapons including the Mauser rifle and the pom-pom gun. The pom-pom was an upgraded version of the Maxim gun that fired a 2-pound shell and the British Tommies were not keen to find themselves on the receiving end of such a weapon. 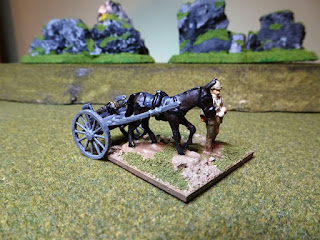 This model Maxim gun and figures are produced by Jacklex (available from Spencer Smith Miniatures) and were amongst the figures I recently received from Ross. I had to touch up them up slightly so that they blend in with my existing British infantry and then base them to my own basing scheme. I’m really pleased with the way they’ve turned out.
Posted by Stryker at 10:57