Following the British victory at Elandslaagte General White ordered all the British forces to fall back on Ladysmith. The Transvaal Boers followed up and soon occupied the high ground dominating the town. When news arrived that the Orange Free State Boers were on the way to join the Transvaal Boers, White decided to attack the enemy positions to prevent a junction of their forces.

White, having previously served in India, had no experience of facing troops armed with modern weapons and underestimated the abilities of the Boers to manoeuvre as well as to fight. He attempted a double envelopment of the Boers with Carleton advancing on the left and Grimwood on the right whilst Colonel Hamilton (with the Brigade that had been engaged at Elandslaagte) attacked Pepworth Hill in the centre. 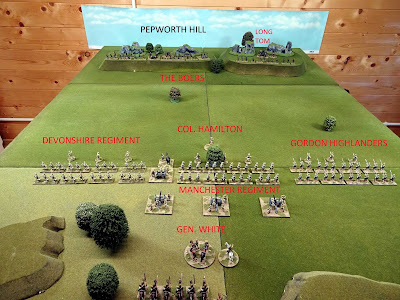 On the morning of 30 October, with the attacks on either flank having failed, Colonel Hamilton found himself required to make a frontal attack on the central Boer position on Pepworth Hill. The Boers had a strong gun line established on the Hill which included a Long Tom gun that could out-range the British artillery and reach to Ladysmith itself.

Special Rules
1. Ladysmith is located on the base line of the British forces and is allocated a Damage Point (DP) value of 15. The Boer Long Tom may fire on the town and inflict DP's as if firing on troops in open order. If the town receives total hits equal to it's DP value the British will lose heart and retire resulting in a victory for the Boers.
2. If the British succeed in eliminating the Long Tom the game ends in a British victory (note that the British Field Artillery are out of range of the Long Tom and cannot fire on it nor can they move).
3. All other rules are played as normal.
Order of Battle
British C-in-C Lt General White
Col Ian Hamilton
Devonshire Regiment
Manchester Regiment
Gordon Highlanders
1 x Maxim Gun
3 x Batteries Royal Field Artillery (21st, 42nd & 53rd batteries)
Boers C-in-C Commandant Joubert
Ross Commando
Jacklex Commando
Newline Commando
1 x Field Artillery
1 x Pom Pom
1 x Long Tom
Victory Conditions
In addition to the victory conditions already stated the game will end in a Boer victory if the British fail to destroy the Long Tom by the end of turn 12.
Posted by Stryker at 05:41