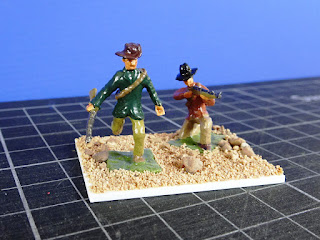 The Boers shown here are Jacklex and they actually look quite good now based up. I’m not sure if I will lose the gloss finish or not, probably but I’ll see. As you know I’ve been in two minds about which figures to use for this project but it occurred to me that there’s no reason why I can’t use both Newline and Jacklex as long as I select figures of compatible size and don’t mix them within units. That way I get the best of both worlds.
Posted by Stryker at 04:02

Email ThisBlogThis!Share to TwitterShare to FacebookShare to Pinterest
Labels: Boers on foot, Jacklex