First of the Guards 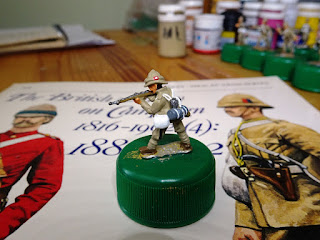 I couldn’t resist painting up this test figure for what will be my Guard battalion – no particular one in mind but possibly they’ll represent the Coldstream Guards who took part in the actions at Modder River and Magersfontein.

The figure is from Raventhorpe Miniatures ref BO13 British standing firing. I really like this range as they are amongst the few 20mm models available specifically designed with the Boer War in mind. There is a lot of character in this pose that somehow conjures up that Boer War feel.

I’m going to need more British troops because I’m hoping to receive some Boer reinforcements shortly and we can’t have the Boers outnumbering the British as that just wouldn’t be cricket.
Posted by Stryker at 05:06