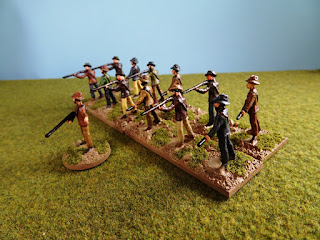 Each of my Commando’s will be comprised of 12 men plus a Commandant based in such a way as to allow casualty removal. The initial phase of this project will require me to have three such Commando’s and I’m well on the way to this now.
Posted by Stryker at 12:04

Email ThisBlogThis!Share to TwitterShare to FacebookShare to Pinterest
Labels: Boers on foot, On Parade, Scruby