Having rebased the Scruby foot figures I felt I had to make the effort and do the same for the mounted ones. They needed a little more TLC than their foot brethren but I limited the repainting to areas that were worn or scratched as I wanted to retain as much of Ross’s painting handiwork as possible. 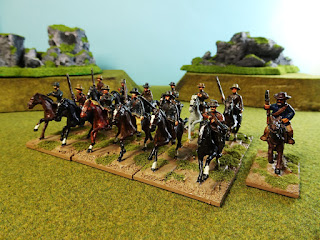 I’m very pleased with the way they’ve turned out and I must admit I’ve grown to love these old sculpts which date back to at least the 1970s. The horses have a certain something about them and manage to successfully convey movement in a way that not all more recent figure designers have managed. 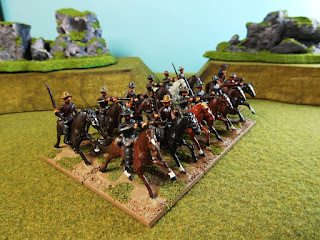 Within the ranks is one Jacklex figure but he blends in so well you’ll have a hard job to spot him. The Commandant figure is one of the contemporary mounted figures produced by Newline Designs.
Posted by Stryker at 10:32