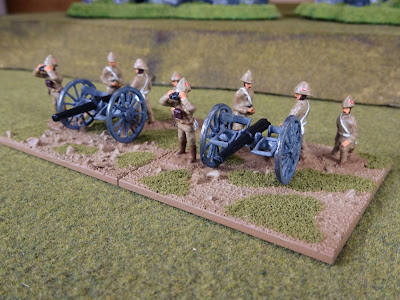 These gun batteries complete the British artillery for this project. The figures and guns used are all from the Jacklex colonial range. I removed the rammers from the hands of two crewmen as the guns in this period were breech-loaders.

The guns have crew seats over the axle on either side of the barrel which were a bit of a fiddle to fit. There is an illustration of guns going into action on the front cover of my dogeared copy of Pemberton’s Battles of the Boer War that shows two crewmen clinging for dear life to these seats as they charge forward. That must have been a terrifying ride in a real battle.

Now these guns have been added to the British OOB it will be possible to have a proper game at last.
Posted by Stryker at 00:58