Below is a scan of a map I drew of the Battle of Talana Hill for my 4th Year school history project back in 1970. I can’t remember where I copied it from, or in fact where I got the information about the course of the battle, but it may have been Montgomery’s A History of Warfare which is the one book listed in my project bibliography that I no longer have. 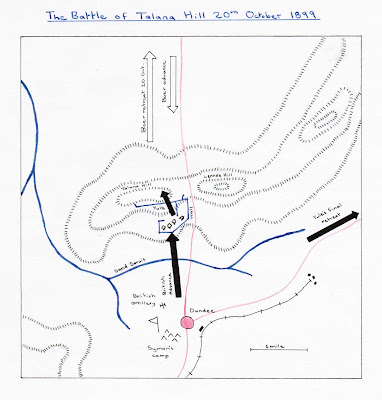 There are four pages of my hand-written burb on the battle and I was fascinated to re-read it 50 years on. I’m not sure why I wrote so much about this engagement but in my text I declare "I have decided that Talana shall be one of the battles that I describe, not because it was the first engagement but because of the lessons it taught". And in my summary, I concluded, "The lessons that it taught were, firstly, a steep-sided hill occupied by the Boers offered no sound defence owing to the dead ground between its base and the summit. Secondly, officers holding swords and wearing marks of rank were easy targets for Boer marksmen. Thirdly, a frontal attack was no way to deal with an enemy armed with the Mauser rifle". Hmm, possibly I plagiarised that but whatever, it sounds authoritative – possibly I will need some rule amendments!
So, it makes sense to have Talana Hill as the starting place for my re-fights in miniature.
Posted by Stryker at 12:47

Email ThisBlogThis!Share to TwitterShare to FacebookShare to Pinterest
Labels: Battle of Talana Hill