While Methuen conducted operations in the west and Buller personally supervised those in the east, it fell to the veteran of Omdurman General Sir William Gatacre to hold the central position in eastern Cape Colony. Gatacre was tasked with preventing the Boers moving any further south than the positions they held at Stormberg.

Gatacre was a highly respected and capable officer but the force he was allocated was woefully inadequate for offensive operations, yet he received contradictory instructions from both Cape Town and Buller which whilst saying he “had a free hand to act” made it clear they expected him to attack.

So it was that on the evening of 9th December 1899 Gatacre took his meagre force forward with the aim of expelling the Boers from the Kissieberg Kopje and forcing them to abandon Stormberg. Marching by night and having only inaccurate sketch maps he ended up coming against the Boer positions from the wrong direction although fortunately for him the Boers were as surprised as he was.

This scenario aims to recreate the resulting assault by the British on 10 December that was to mark the beginning of Black Week in 1899. 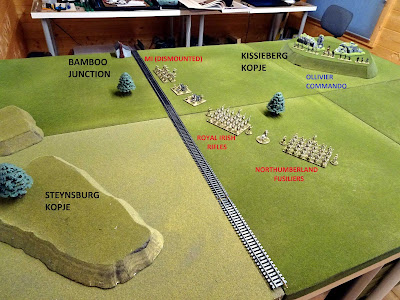 1. The British battalions begin the game in column and do not deploy to line until fired upon. Once deployed they remain in close order. The Boers were surprised by the British line of approach and did not open fire until they were very close. Rule: The Boers must attempt to spot the British each turn on die roll of 4, 5 or 6 (they are automatically spotted when within 18”).
2. During the battle Boers occupied the Steynsburg Kopje where they brought fire to bear on the British rear. Rule: at the start of turn 2 Boers roll 1x D6, the Boers appear on the Steynsburg on a 5 or 6 (continue rolling each turn adding one to the die roll every time). The Boer troops are not permitted to move off the Steynsburg Kopje.
3. The British force attacked in a different location to the one chosen by Gatacre in an area that was almost a sheer cliff making the attack hard going. Rule: to represent this, British troops must -1 from all melee die rolls.
4. Once again, the British suffered casualties from their own artillery as they could not clearly spot the progress of the infantry. Rule: if the artillery is firing on Boers within 12” of any British infantry then split the firing dice 50:50 into two colours – white will be hits on the Boers and blue on the British.
5. The Mounted Infantry were tasked with protecting the guns and did not take part in the attack. Rule: The Mounted Infantry must remain with the guns. They may turn to fire at any Boers that appear on Steynsburg Kopjie.
Order of Battle
British C-in-C General Gatacre
2nd Northumberland Fusiliers
2nd Royal Irish Rifles
Mounted Infantry (half-battalion dismounted) protecting guns
74 & 77 RFA

Email ThisBlogThis!Share to TwitterShare to FacebookShare to Pinterest
Labels: Battle of Stormberg, Scenario